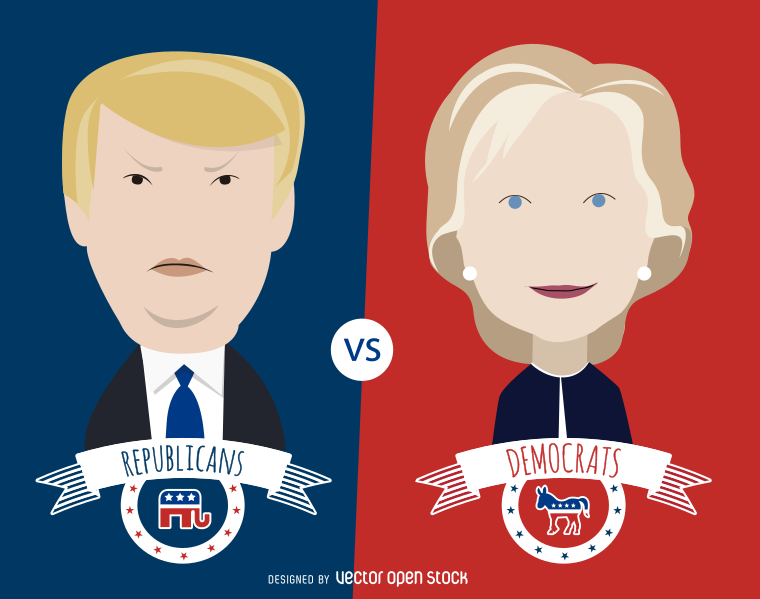 Could this be the ugliest American presidential race ever? Whichever way the 2016 election goes, the result could send the country spinning in a new direction.

For the first time in history, a woman, who happens to be a seasoned political insider, has been nominated by a major political party, the Democrats, to run against a Republican opponent, a real estate/reality-TV host with no political experience. These are two distinctive candidates, with well-known characters and brands, whom America has been watching for decades. Yet, who has the brand that speaks better to voters: Hillary Clinton or Donald J. Trump?

Trump is a loud, big-tweeting, politically incorrect business mogul and entertainer who, depending on one’s view, comes off as a powerful tycoon or a wanna-be dictator. Trump warns that America is heading in the wrong direction; unsuccessfully conquering global terrorism, falling behind in the world economy, and hurting from mass immigration. With his straight-talk and soundbites, Americans feel like they know him. It seems that every day, Trump says something offensive and never apologises. Nevertheless, he has become the voice of millions. He expresses the way a large segment of the population feels when no one else would. Even allegations of sexual assault have not inflicted serious damage to his brand. Trump’s supporters are fed up with the establishment and the political system today. They love America and feel anxious about the future. Phoney or not, Trump’s brand is about authenticity.

Clinton, on the other hand, is a savvy and experienced politician, with impressive qualifications to be president after years of public service. However, her political ambition, a questionable term as Secretary of State, and the recent email scandal raise questions about her honesty and trustworthiness. She is also tainted by her husband, the former President Bill Clinton’s audacious affairs and the humiliation that followed. While Trump wants America to stop playing fair and use force, Clinton argues for diplomacy and staying calm to foster good relations. Fairly or not, Clinton’s brand can be summed up as enduring and competent, but slippery.

In this race, both nominees are not only trying to drive up their own individual assets and advantages, but to drive up their opponent’s faults as well. They are seeking to unravel each other’s brand and boost their own. However, their personalities aren’t the only contrasts. Let’s have a look at their political ideas.

Trump wants to cut taxes for the rich while Clinton wants to raise them. Trump wants to build a “big and beautiful” wall on America’s southern boarder, since he believes that immigrants from Mexico and all kinds of Muslims are threats to America. Therefor, he wants a wall to keep them out. On the other hand, Clinton describes immigrants as a symbol of diversity and America’s strength. She has also advocated allowing 65,000 immigrants from Syria to enter the United States as refugees. Trump also claims that global warming is a hoax carried out by the Chinese whereas Clinton describes the problem as catastrophic for the planet’s future.

Trump and Clinton have competing visions of America which make many of their solutions for fixing the country vastly different. Looking at the polls now, Clinton is leading in many battleground states and has the better chance of winning. However, both Clinton and Trump have the highest disapproval ratings of any candidates who have ever run for President of the United Sates. If Clinton wins, it may not be because voters like her more, but because her opponent has offended so many people. Whatever happens, boundaries have been broken in this race with the first female nominee of a major party and a political outsider who defies convention. The American political landscape may never be the same again, but one is hopeful the country can come together and move past the ugliness of this election.